As featured in The Guardian Feast March 2018 – readapted here 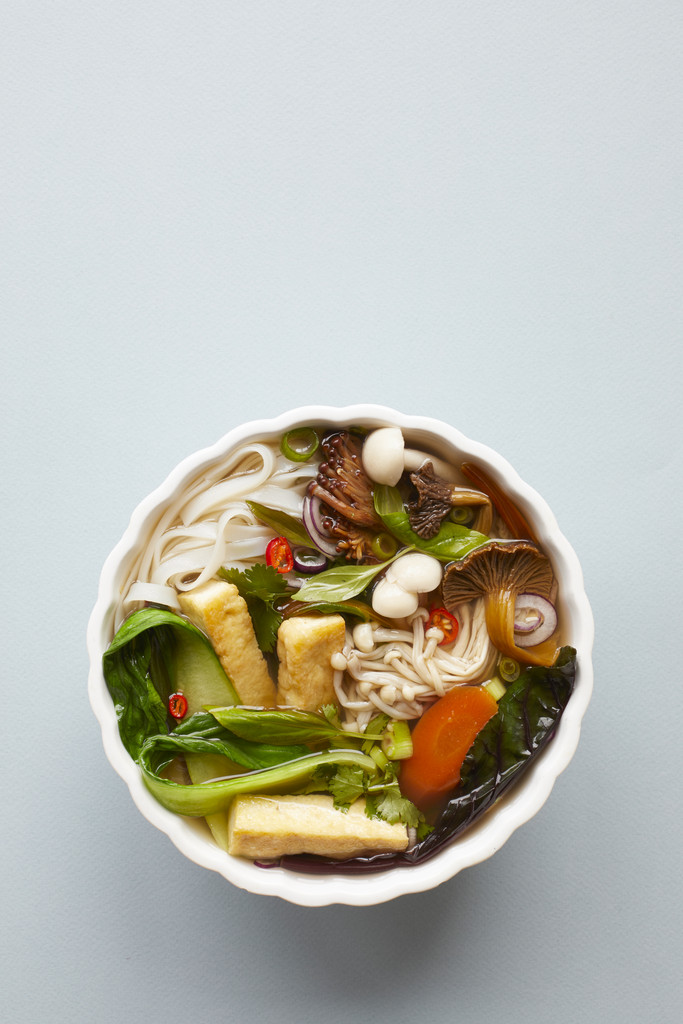 Pho is loved by the Vietnamese and people all over the world. Vegan pho is really popular because it basically has that “pho hit” without any meat which isn’t really missed here and takes half the time. The monks missed their pho so created the vegan kind.

This recipe is an example of what vegetables you can use and the quantities have been measured for this amount of water for the stock. I love to use aniseed flavour vegetables such as fennel and celeriac to bring out the flavour of “pho”. By using sweeter root vegetables such as sweet potatoes and carrots can help you use less sugar in the broth. You can make the broth much richer by charring some of the vegetables first.

You can use whatever vegetables you have available but it is really important to char the ginger and onion, this really adds to the marvellous flavour of pho and this step should never be missed.

A lot of people are surprised about the amount of star anise this stock requires. Depending on when you put them in, they will fade if they have been cooking since the start or will be much stronger if you put them in towards the end. You can always put less first and add more. For this recipe, I have used 20 from the start.

Every time you make a stock pot of pho broth, it will vary from the last. I have noticed that making it in different sized pots gives it different variations in quantities too and it is not easy to create the exact broth every time in every kitchen. Please use your instincts and judgement. Taste the broth, add to it but also be gentle with it. It will be different every time.

In a griddle pan on high heat, char the onion, ginger and daikon on both sides.

Place in a large pot of boiling water with the root veg, mushrooms, fennel and celery. Add in the spices, cover with a lid and simmer for 20 mins. Remove and set aside the mushrooms, then simmer the broth for a further 40 minutes. Remove the remaining vegetables from pot.

Meanwhile, fry the tofu in the heated oil for 5 minutes on each side until golden brown, and drain on kitchen paper.

When ready to serve, place the noodles in a saucepan, submerge in boiling water, cover and leave for 4-5 mins, then drain, rinse under warm running water until the starch runs clear. Drain in a colander then portion into noodle soup bowls and season with a pinch of black pepper and a couple of slices of chilli. Place batons of tofu and slices of the stock vegetables & mushrooms on to the noodles, and top with spring onion, shallot, coriander, enoki & pak choi leaves, chard, watercress or spinach.

Ladle over the hot broth, making sure that everything is submerged. Serve immediately with more of the garnishes & lime juice.

If you are not vegan, try adding a good premium quality fish sauce to the broth (only use half amount of salt) – its amazing! And a soft boiled egg, sliced in half.